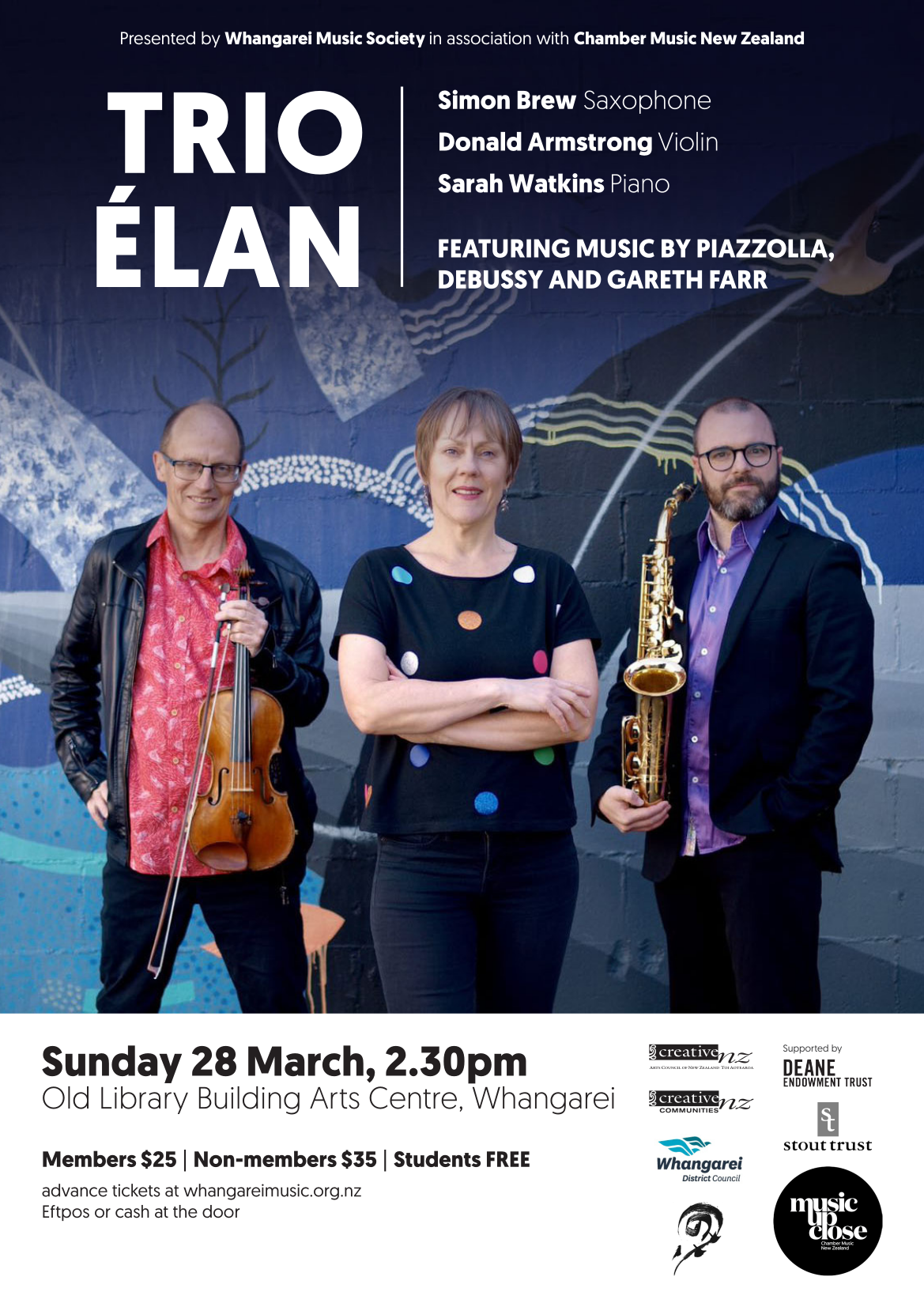 Trio Élan is an electrifying new ensemble made up of three of New Zealand’s leading chamber musicians: violinist Donald Armstrong, saxophonist Simon Brew and pianist Sarah Watkins. Featuring this unique blend of instruments, classical music fans maybe sceptical of the place of the saxophone in chamber music. But it works. In a rare and exclusive programme which showcases the dynamic and seductive sounds of three wildly different instruments, audiences will be swept along by colourful and jazzy music from France, New Zealand, Argentina and the US.

Since Adolf Sax invented the saxophone in the 1840s, composers have been captivated by its magical sound and have combined it with many other instruments. Debussy and Ravel incorporated its beautiful sweetness in their impressionist music, influencing such contemporary composers as Algerian-born Marc Eychenne. The saxophone lies at the heart of newer styles such as jazz, dance, and pop music, and the violin and piano have taken to these new styles with ease.  Brand new
work by emerging NZ composer Peter Liley, a saxophone player himself known for his virtuosic and groovy works, also feature.

is Associate Concertmaster of the NZSO. Formerly the Principal Second Violin of the Tivoli Sinfoniorkester in Denmark and Co-Concertmaster of the Orchestre Philharmonique de Nice in France, Armstrong was the Music Director of the NZ Chamber Orchestra since its inception in 1987 until 2005. He is a major force in creating the dynamic and exciting style of the NZCO heard both in live concert and on its many commercial recordings. He plays a violin by Nicolo Gagliano of 1754.

graduated from the ArtEZ Conservatorium, Netherlands, with a Masters in classical saxophone where he won the prestigious Grachten Festival Conservatorium Competition, Amsterdam and the Artez Kunstnacht Competition for top graduating student. He performs regularly as Principal Saxophonist for the NZSO and Orchestra Wellington and has played with the Rotterdam Philharmonic Orchestra, Auckland Philharmonic Orchestra, Netherlands National Orchestra, and the Netherlands Blazers Ensemble among others. He is also in demand as a soloist, chamber musician, music director and teacher at home and overseas.

has had a lifelong love for accompanying and chamber music, which has led to an impressive career as a performer and recording artist. She is best known to New Zealand audiences as a founding member of NZTrio, has been an official pianist for the Michael Hill International Violin Competition since its inception in 2001, and at the Gisborne International Music Competition since 2008. She regularly appears as a freelance player in the APO and has also performed as concerto soloist with the APO, ACO and St. Matthew’s Chamber Orchestra. Her recordings ‘Sway’ (NZTrio, 2017) and ‘Gung-ho’ (2009, with NZSO principal trombonist David Bremner) were both winners of the Vodafone NZ Music Award for best Classical album.

Sarah is a graduate of the University of Canterbury (NZ) and The Juilliard School (NY), earning MM and DMA degrees collaborative piano. She is an artist teacher and chamber music coach at the University of Auckland, and she enjoys a wide variety of collaborations with musicians all over New Zealand.