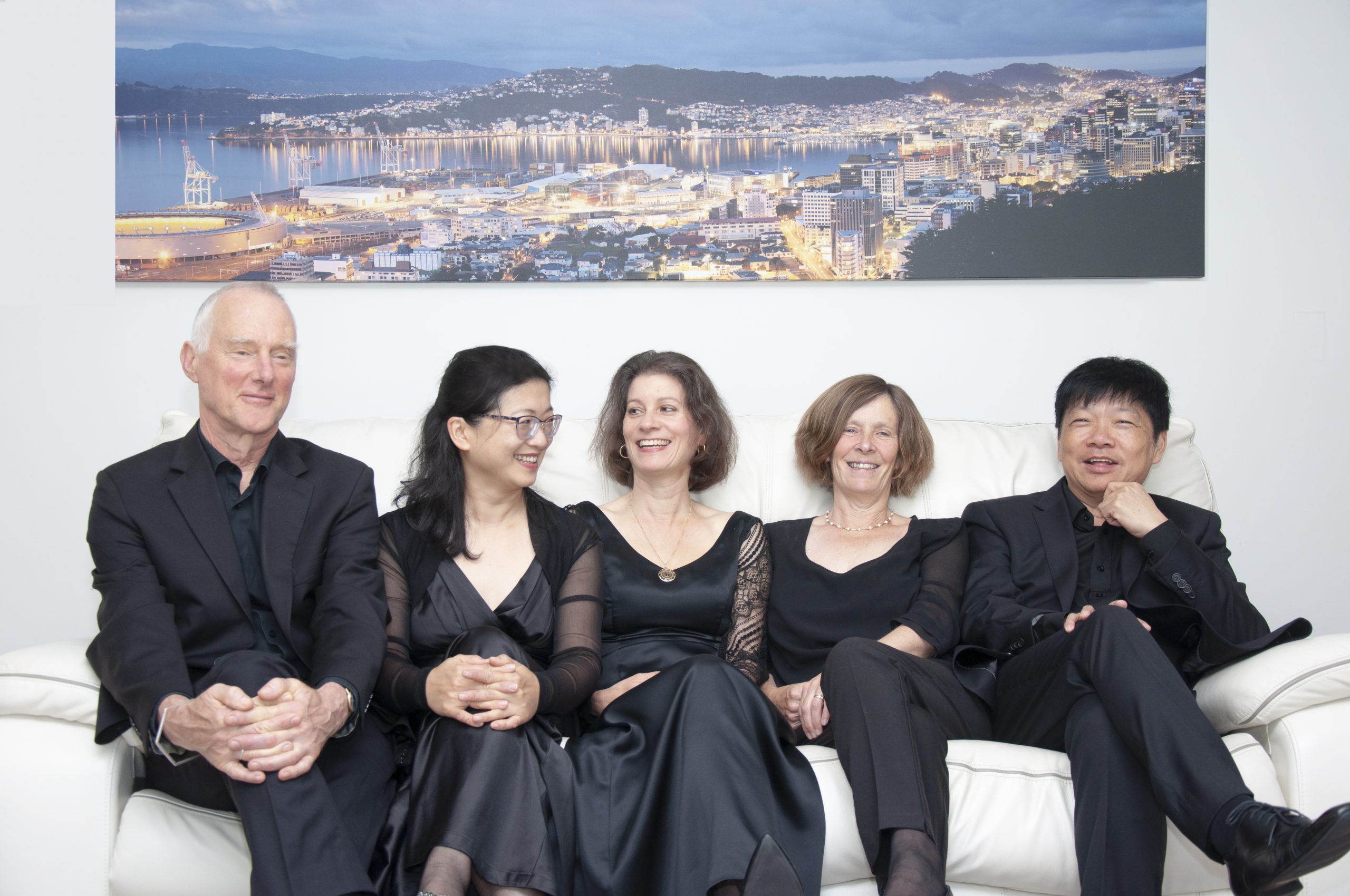 The Aroha String Quartet is firmly established as one of New Zealand’s finest chamber music ensembles. A Wellington-based group, founded in 2004, the Quartet is known for its passionate musicality, impressive technique, and multicultural innovation.

Performing regularly around NZ in centres from the Deep South to the Far North. Musicians Haihong Liu and Anne Loeser (violin), Zhongxian Jin (viola) and Robert Ibell (cello) are acclaimed as demonstrating “accomplished brilliance, soulfulness and sublime intensity in perfect balance and tonal unity” (The Dominion Post). Joining the String Quartet for our concert, Rachel Vernon, has been Principal Bass Clarinet in the NZSO since 1995.

Guest Soloist Rachel Vernon – Clarinet
Rachel Vernon has studied in London with Antony Pay and freelanced with orchestras including Bournemouth Symphony Orchestra, the Royal Liverpool Philharmonic and Scottish Opera Orchestra.
In 2016 Rachel joined the Zephyr Wind Quintet in a series of concerts featuring NZ composers including the premiere of a new work by Leonie Holmes
Rachel Vernon has recorded for Radio New Zealand and Re-Sounz and performed as a soloist with the Wellington Chamber Orchestra and the Manawatu Sinfonia.
Haihong Liu – First Violin
Chinese-born NZSO first violinist, Haihong is a graduate of the Beijing Central Conservatory of Music in the People’s Republic of China, where she won the China National Chamber Music Competition in 1995 with the Beijing String Quartet. As a member of that ensemble she enjoyed a varied international career of concerts, festivals, and competitions throughout China, as well as major cities in Asia and Europe.
After six years teaching as a violin and chamber music lecturer at the Xinghai Conservatory of Music of Guangzhou, Haihong emigrated to New Zealand with her family in 2001, initially joining the Auckland Philharmonia Orchestra as sub-principal first violin, and moving to the NZSO in 2002
Anne Loeser – Second Violin
German-born Anne studied violin at the Frankfurt Musikhochschule. Before emigrating to New Zealand, Anne played in the Beethoven Orchestra Bonn and Hesse State Theatre Orchestra in Wiesbaden. She was also a member of the award-winning Orfeo Quartet which won a DAAD scholarship for a year’s post-graduate study with Sandor Devich of the Bartok Quartet in Budapest. With the Quartet she toured throughout Europe and in South America.

As soloist, Anne has appeared in various cities in Germany, Russia and New Zealand, joining the first violin section of the NZSO in 2000. She is a member of the Koru Piano Trio, the Orion String quartet and concertmaster of the Days Bay Opera Orchestra. She has played with Aroha Quartet on many occasions. Anne is the musical director and leader of Camerata, a Wellington based chamber orchestra dedicated to performing Haydn’s early symphonies.

Zhongxian is a sought after violin teacher with studios in both Wellington and Auckland. He travels regularly to China and Taiwan for festivals, masterclasses and coaching chamber ensemble and string orchestras.
Before moving to live in New Zealand with his family in 2001, Zhongxian was a violin professor for 16 years at the Xinghai Conservatory of Music in Guangzhou, China.
Zhongxian has been the violist of the Aroha String Quartet since its inception in 2004.

Robert  Ibell, born in Dannevirke and brought up in Palmerston North, took up the cello while training as a school teacher, learning from Judith Hyatt in Wellington. Living in London from 1986 to 1992, Robert undertook further training, playing at music schools and in masterclasses  (where his teachers included Alexander Baillie, Steve Doane, Anner Bylsma and Steven Isserlis), later giving recitals and played in professional and amateur orchestras.

From 1993 to 2019 Robert was a member of the New Zealand Symphony Orchestra. He is now a cello teacher, chamber music coach, adjudicator and freelance performer. Robert is a member of the Aroha Quartet, square piano/cello duo Hammers and Horsehair, contemporary music group Stroma and indie/folk/rock band Milkthistle.